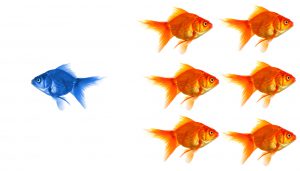 I confess, I’m a bit of a rebel. A quiet, mostly well-behaved rebel, but a rebel nonetheless. I don’t like conforming. Following the crowd. When it seems everyone is doing something…

Like making resolutions at the beginning of a new year.

Or choosing a word for the year.

I want to do something else.

Besides, those resolutions are so…resolute.

So just as I was rolling my eyes at the tide of new year commitments rising in my social media feed last week, a term flowed through my consciousness…

Well, if I was one of those people who chose a word for the year… But I’m not. I waited for the word to ebb, to recede from my awareness. Instead, it lapped, and lapped. And lapped…

So, chagrined, I’m tossing my own word for 2017 in with the sea of others. But that doesn’t mean I’m really conforming, does it? It’s just that, well, in 2016 I wrote a novel about a novelist who is anything but mindful. She’s in the habit of letting the wanderings of her mind ride the current. Going this way, then that.

That’s what we creatives do, right? Flow with the ideas that present themselves.

The problem is that Melanie, my character, lets the current take her out of the current and the lines between her reality and her fiction begin to blur. And she starts missing things. Important things.

Except, maybe when I’m…not. Like when my housemate is telling me something, but instead of listening to her I’m thinking about the story I’m writing or the cute boots I saw online today while I was supposed to be writing. Or maybe, mid-conversation, I pick up my phone because an alert dinged, or beeped, or squealed and I might miss something more…important?

But those instances are rare. I think.

It’s odd though… Sometimes, like last night, I sat down to watch the evening news before my housemate arrived home from work. Then after she got home, she asked if I’d mind watching it again—the recorded version. I shrugged. “I don’t mind, but it wasn’t all that interesting.”

When I watched the newscast again, I realized how much I’d missed the first time. Why? Where was my mind? What was I thinking about? Doing? Had I watched it at all?

Am I alone in my distraction?

Are you mindful? Present to the moment, living in the moment?

If not, maybe you’d like to—sigh—resolve, along with me, to consider what mindfulness means. (Notice I didn’t ask you to resolve to be mindful? Let’s take this one small step at a time.)

I’m thinking of this as an exploration.

If you’d like to join me, you’re welcome to follow along the next several months as I share my discoveries. I sense there’s more going on in the moment than I’ve realized. In fact, as I was writing Home, one of my character’s whispered something I hadn’t thought of before: God meets us in the moment. He is past, present, and future. But we’re bound by time, so He is present in our every moment. Always. And He waits for us to join Him…

What if in my stubbornness or, gulp, arrogance, I’d missed the word that breezed through my mind?

What else might I have missed this coming year?

I’d love to hear from you. What does mindfulness mean to you? What does it look like for you? How are you intentional about being intentional in the moment?

In the months to come, I’ll share some of what I’m learning. I hope you’ll join the conversation by leaving a comment on the posts or following me on social media where the conversation will continue.